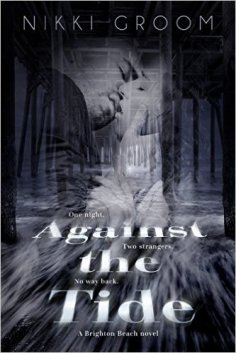 That’s a lie. I was lonely. That’s a lie. I was incomplete. He was nothing but a handsome distraction. She was nothing but a pretty pastime. That’s untrue. He changed my life. That’s untrue. She altered my world. I blame him. I blame her. I blame myself. He wasn’t to know. I blame myself. It wasn’t her fault. I don’t want to need him. I hate that I want her. There’s no easy solution. There’s no going back.

“You feed something in me, a desire, I can’t explain it. But you also hurt my heart in the most excruciating way possible. It breaks every time I see your pretty face.” Finn James.Goodreads is asking me what I think, and I don’t know if I have the words inside me that can give this book the justice it deserves but I am damn well going to try. For want of a better description, Against The Tide is f***ing amazing!No, I won’t filter because this story blew my mind! I connected with it immediately. Maybe because it is set in one of my favourite parts of England and written in true southern British dialect, or maybe because from the offset this book goes from 0 to 60 in a heartbeat that gave me the shivers and rendered me speechless, and, if I’m honest, a little awed. Whatever it was, I can tell you that this book sank its talons into me and even though it hurt, I didn’t want it to let go.I am going out on a limb now to say that Against The Tide has a strong drug theme in the first few chapters and there are no hearts and flowers here, only heartache, confusion, lust, hate, and a need for revenge. I loved the moody tone, it was atmospheric and gripping without being depressing and sombre. Even though there is an element of that, the characters are too interesting to be anything but likeable even though they are trying to overcome some challenging times. But please, DO NOT let any of this deter you, because I loved how it started dark and manifested into something profoundly beautiful.Megan and Finn are thrown together at the worst and best possible time. The girlfriend of a renowned and protected drug dealer, Megan is not naive when it comes to her high school sweetheart’s career choices, but having him work away from home more often than not, Meg throws herself into her job at the local tattooists, as a body piercer. In those moments she is free doing something she loves, something honest.Finn hasn’t had a serious girlfriend before, a hook-up now and then has even lost its appeal as of late since the devastating news of his terminally ill Mother. Life has dealt a hard blow and drugs and alcohol are his escape from the harsh reality that everything is about to fall to shit.It doesn’t help that the woman he lusts after is just a shadow behind the boyfriend who thinks he owns the club he frequents. Her face a welcome sight in a world that seems so unbelievably cruel.When she smiles, he forgets his name. When they come together in a dark alley and there is no running from the face that haunts his dreams, it only ends one way… a frantic sex session and a whispered goodbye. That is until fate deals another hard blow and Finn and Megan are thrown together under very different circumstances, and lust turns to hate, only to manifest into something real, solid, something resembling hope…I loved how it started angsty, and manifested into something beautiful. I loved Meg and Finn even when they struggled to love themselves. Finn… he is a special kind of broken and you will just want to wrap him up in a security blanket and never let go.Gah… I even loved Harley, Kyle and Torran even though they were secondary characters, and I can’t wait for them to get their own books. The banter, the honesty, the fear, the guilt, the passion, I felt it all, but what I loved most was that Meg and Finn worked at their love and it wasn’t just thrown out there within the first few chapters.

It was thwart with challenges that added depth and substance. Against The Tide tackles real issues that break and destroy families, but it also focused on friendship, new beginnings and gave a message of hope.With alternating POV’s, Against The Tide paints a picture with words that I cannot get out of my head but I sure as hell don’t want to. That epilogue had me shed a tear or two, that’s how much this book affected me. Nikki Groom has proved her author status with this one as it shoots onto my favourite reads list of 2015.‘I’ve gone from wanting her, to believing I hated her, to not even being able to imagine my future without her in it.’It is so hard not to give anything away. Avoid spoilers where you can. Go in blind. You won’t be disappointed!5 stars

Guest review contributed by Perusing Princesses. They are Elizabeth, Kelly, and Emma. They are three women who joined together in creating their little corner of heaven to enjoy their passion…reading!

2 thoughts on “Against the Tide – Book Review”