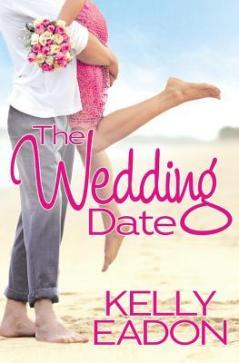 A LITTLE FAKE RELATIONSHIP NEVER HURT ANYONE . . .
Kate Massie has big dreams-they just haven’t worked out. Yet. In the meantime, she spends her days clerking for a judge and her nights fantasizing about her tall, dark, and sexy gym crush. So when she runs into him one night, she’s shocked to realize he was her shy, nerdy junior-prom date. But that isn’t where the surprises end . . .
James Abell needs a date to his sister’s wedding. So when Kate agrees, he’s relieved . . . until one little lie turns their wedding date into a full-blown fake relationship. Only it doesn’t feel fake-not the toe-curling kisses and definitely not the electricity. Neither of them is looking for something real . . . but they just might fall for their own little white lie.

Thank you, Forever Yours!

Don’t judge a book by its cover, right? Except sometimes that works. Take the cover of “The Wedding Date” as an example. So sweet. Just like the story inside.

Kelly Eadon’s debut brings us one of my favorite tropes: fake relationships. I’m a sucker for how two strangers (or sometimes friends) get to know each other and fall in love while pretending to be a couple. This is what happens to Kate and James, the main characters in “The Wedding Date”.

Many years ago, Kate did a friend a favor and went with shy and nerdy James to junior-prom. Nothing happened between them back then and apparently they didn’t talk much after that. Life went on. Kate went to law school, James became an engineer. Kate had a few relationships, but nothing too serious. James spent nine years with his high school sweetheart but recently broke up with her. Now that she’s back in town after losing the job opportunity of her dreams, Kate and James are finally on the same page: single and interested.

Nerdy James has changed and is now Kate’s hot, sexy gym crush. He’s no longer the shy boy from junior-prom. He wants Kate and he makes it clear from the start. Hello, flirty, sexy man! *swoons* Except before he gets to the “I like you, so go out with me” part, he’s forced straight into a “pretend to be my girlfriend” phase.

That’s because James’ mother doesn’t seem to have noticed her son left his teenage years behind a while ago. She’s one of those moms that can’t let her children make decisions for their lives without meddling. With one son happily married and a daughter soon to be, James is the only one left for her to “fix”. Poor James doesn’t know how to stop the woman without lying to her.

Good thing Kate is willing to play fake girlfriend, and that’s what she ends up doing when she agrees to be James’ plus-one to his little sister’s wedding. What she wasn’t counting on was falling for him. Not a problem, since he fell for her, too. And the whole thing was pretty great to watch.

Kate and James’ story was incredibly sweet, and it wasn’t only because they were obviously made for each other, but also because of James’ family. Kate lost both her parents when she was very young, which means she hadn’t had the chance to experience what being a part of a big family meant before she met James. The Bells took Kate in with opened arms and, although dysfunctional, they were pretty entertaining.

James’ mother was a piece of work. There were many times I cringed seeing how she treated her grown-up children like they were little kids, but it was hard to dislike her when she showed us more than once that she had a great heart. The way she welcomed Kate and made sure she felt like part of the family (especially the gluten-free stuff in the end) was pretty amazing. Same for James’ brother and sister-in-law. They were a fun couple and treated Kate like an old friend. All of those characters made this story extra sweet.

I have to mention the dog for a second because he was adorable. Plus, I’m a dog person, so bonus points for having one.

This book was low on the drama, which is refreshing considering how many contemporary romances use complicated plot choices and heavy backstories to keep the couple apart for as long as possible. Not a critique. I loooooooove those, but every now and then it feels good to read something lighter.

So if you’re looking for a cute and sweet romance story with good side characters and an interesting, fun and crazy family, I highly recommend “The Wedding Date”.

You can find The Wedding Date here. 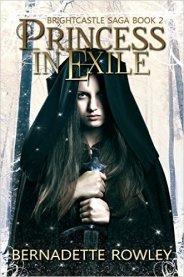 Princess Alecia flees her arranged marriage with the help of the dangerous Vard Anton, shapeshifter and former army captain. Blinded by love, they believe they can have a life together but every encounter with the mercenaries sent to find them, pushes Vard towards his least controllable form- the gigantic brown bear.

Desperate to find a mentor who will help him control his transformations, Vard and Alecia travel to a forgotten city where a powerful sorcerer resides. But this wizard is in league with the dark elves and the lovers soon discover he has his own dangerous agenda.

Will Vard and Alecia escape the clutches of the sorcerer who would use Alecia’s position to advance the dark elven cause? Can their love survive despite Alecia’s fear of Vard’s animal transformations? What secret does the princess hold that has the power to destroy the trust Vard has in her?

The answers to all this and more are contained in the pages of Princess in Exile, the dark sequel to Princess Avenger.

You can also find this title on Smashwords.

One thought on “The Wedding Date – Book Review”