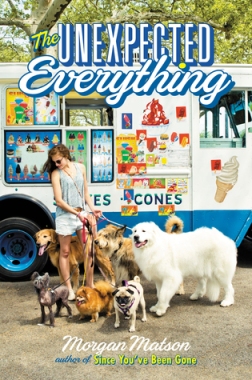 Andie had it all planned out.

When you are a politician’s daughter who’s pretty much raised yourself, you learn everything can be planned or spun, or both. Especially your future.

Guys? Check (as long as we’re talking no more than three weeks).

But that was before the scandal. Before having to be in the same house with her dad. Before walking an insane number of dogs. That was before Clark and those few months that might change her whole life.

Because here’s the thing—if everything’s planned out, you can never find the unexpected.

And where’s the fun in that?

Well this book was a roller coaster ride of feels.

I’m just going to start out this review with GO AND READ THIS BOOK IF YOU HAVEN’T YET BECAUSE, I MEAN, WHY HAVEN’T YOU?!

Seriously though, The Unexpected Everything was THE BEST.

Believing you’re not alone is the cruelest trick of all.

TUE is the second Morgan Matson book I’ve ever read, the other being Since You’ve Been Gone. I seriously loved SYBG since it focused not only on romance, but friendships as well, and TUE is no exception.

We get to see more BFF action in The Unexpected Everything, which I TOTALLY LOVE because YAY FRIENDSHIP. I could really feel how fun Andie’s friends were. I mean, if I had those kinds of friends I’d most probably never leave them. They’re basically the best.

I SERIOUSLY LOVED THEM. I don’t even know why. Andie’s group messages with her friends was really fun to read because a) they were realistic, and b) emojis were kicked into it, which is very cool.

I also enjoyed reading Toby’s emoji challenge and deciphering her messages myself. It was very cute. Maybe one day I’ll try talking using only emojis too… *strokes nonexistent beard*

Theoretical crushes could remain perfect and flawless, because you never actually had to find out what that person was really like, or deal with the weird way they chewed or anything.

I could honestly rave on and on about this guy forever. IT’S SO UNFAIR THAT ANDIE GOT TO MEET SOMEONE LIKE HIM. IS THERE EVEN A REAL-LIFE EQUIVALENT TO CLARK?! HUH? HUH?? I DEMAND JUSTICE.

I swear I’m trying to write a coherent impression I had with Clark but MY FEELS. He’s basically cute and charming and funny and actually LIKES THE DECENT KIND OF GIRLS. He’s not the annoying type who likes the bad girls and smokes or something. And he’s also a FAMOUS FANTASY WRITER.

WHAT MORE DO YOU WANT FROM A GUY?!

The humor (+ the scavenger hunt!)

“Andie walks my dog,” Clark said, giving my dad a smile. “Well, not my dog, exactly,” Clark amended after a second. “But the dog who… lives in my house.” Now it was my turn to stare at Clark, but before I could say anything, he added, “Well, not my house, so to speak—”

“Bertie’s not your dog?” I asked, feeling my eyebrows fly up.

“Why are you walking his dog?” my dad asked.

The thing I enjoyed the most about The Unexpected Everything is how great it is for a summer read. It’s basically the best contemporary I’ve read during the summer. It has a lot of funny lines and embarrassing moments that’ll make you laugh and fall in love.

I think the best part in the book (you know, aside from every Clark-and-Andie moment) was the scavenger hunt. I laughed at every single moment, and I really appreciated the fact that Andie’s father could actually be really cool and supportive. (Actually, Andie’s father could be quite funny sometimes. I actually liked him a lot.)

“The assassin can’t be named Marjorie. It’s bad enough we’ve got a Karl.”

I don’t even know, bruh. It’s too awesome. And feels-driven. And very cute. And sweet.

But… the ending with Toby and Bri

This is the only scene that really turned me off a bit in the book. I would have appreciated it and wouldn’t also have been a bit annoyed by it if only Andie didn’t hide the truth from Toby. I mean, DUDE. WHY. JUST BECAUSE YOU’RE LIFE’S FINALLY SUNSHINE AND RAINBOWS DOESN’T MEAN IT’LL BE LIKE THAT FOREVER.

I was also a bit weird-ed out by Toby’s reaction to the truth. I mean, I do know how painful it was, but I don’t think it’s enough of a reason to, well, end it like that, if you know what I mean (to those who read the book, you know what I’m talking about.) I’m just really not the kind who tolerates those kinds of girls, sorry. I’m a strong believer of not ruining friendships just because of boys. She could have just forgiven Bri. (I’m also on Bri’s side, by the way.)

Overall, I really enjoyed The Unexpected Everything. It’s a perfect summer read for those who want a fun and light contemporary romance. If you’re a Morgan Matson fan, then you’ll most definitely want to try it out.

Guest review contributed by Mara Was Here. Mara Was Here is a book blog that reviews books–mostly YA–and talks about anything bookish, as well as publishing discussion posts and other features.

American Loren Mackenzie, a professional women’s Elite cyclist, overcame her traumatic past to sculpt herself into a world champion cyclist. Her spirit inspires those around her, often bringing out their best. But such radiance can also burn so brightly as to uncover the darker side of a person’s soul.

When the Fates intervene with a bang, Loren could not have anticipated how a simple bad day would change the course of her life. After a Knight in a Shining Jaguar – British actor Graham Atherton – stops to assist her with a flat tire, neither could deny the flare of attraction or the sense of connection between them. Despite the separation caused by both of their careers, their bond grows stronger.

Can the love of two people, brought together by the Fates, triumph over betrayal and a sinister obsession from Loren’s past?

Wheeler is a novel set in the exciting world of women’s professional cycling, and follows a route where the genres of romance, women’s fiction and sports meet.

2 thoughts on “The Unexpected Everything – Book Review”