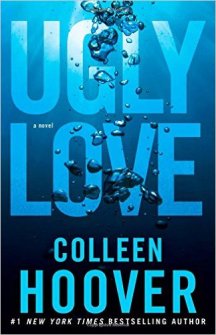 I don’t really know how to review this book due to my mixed feelings. Maybe it was being it was my first Colleen Hoover book, and I was expecting a lot from the dubbed “Queen of Romance”. Ugly Love was completely unexpected for me. This was not what I was expecting AT ALL. AT ALL AT ALL AT ALL. ***Light spoilers***

I read Ugly Love in one sitting, and I was pretty into it. I wasn’t completely absorbed into it, per say, but I was enjoying myself quite a lot with it. However, I don’t think this would have been the case if I hadn’t read it all back to back. While I was reading it, a few things annoyed me here and there, but I didn’t realize how much I didn’t like this book until I started to discuss it with my buddy.

Poems. So this book is divided into two perspectives: Miles and Tate. Tate is moving in temporarily with her brother, and Miles is her brother’s best friend that lives across the hallway. Miles perspectives are all from the past (except one).

And they were written like this
poem.
I didn’t really
know
what to do with them
at first.
And I still didn’t by the end of the
Story.

I get the idea. It’s a cool one. But it really started to annoy me after awhile. The contrast between Miles’ poetic-ness and Tate’s normal narrative was jarring. The metaphor is actually really cool. It’s Hoover’s way of showing how much Miles’ keeps Rachel on this pedestal…how much he loved and wrapped those memories in gold and how much he treasured them. I can’t think of the word that describes this, so there you go. It was cool…but it got old, quick.

The Metaphors. The actual metaphors, not the ones that were insinuated with typography through random line breaks. Tate’s description of her actions around Miles were very worshipful. There were lots of metaphors of water and UGH! They had me cringing every time. Colleen Hoover is a better writer than that! She doesn’t need to double-fist the same metaphors while writing. It’s ok. Put them in the back pocket (and then sit on them until they squish and disappear because they got tiresome QUICK).

Those are all things I can deal with. Really, they were mild annoyances when it comes to the overall book, what really annoys me is the milesandtate.

milesandtate. Is it killing you to see a line start with a lower case letter like it’s killing me? Grr. Anyway. The book was primarily focused on Miles and Tate. Imagine a clothes line, where you can hang laundry. Not that anyone but my grandma does that, but anyway. Picture a bunch of Polaroid’s strung up on the clothes line with clothespins.

They’re snapshots of scenes with two people in them. I picture this for the plot of the book. milesandtate meet. milesandtate argue. milesandtate have sex finally. milesandatate does whatever. First, you have Miles’ POV’s, which doesn’t have Tate in them except for one chapter. They’re of the past. Giving you a glimpse of Miles.

Then you have Tate’s POV, and they’re scenes are entirely focused on what happens between milesandtate. There are NO OTHER THINGS. She has a job, she goes to school, she lives with her brother, she has friends…we have no scenes of this. There are no scenes in the Tate POV that don’t have Miles in them at some point. Sometimes (most of them time) he hasn’t just walked in the door yet.

This is not a bad book. Maybe it’s the fact that it’s my first Colleen Hoover book and I was disappointed by it after being bolstered up by the hype. I’ve been reassured by many people that her other books are WAY better, so I’m not judging her entirely on this experience.

I think that putting Miles’ chapters in the past rather than just having him explain at some point was creatively a cool idea. But to do that and have it be a reasonable length, sacrifices were made that shouldn’t have been made. The story, at the bones, was a good one and, despite everything, I really did enjoy it. There was just a lot getting in the way of the story, that I couldn’t focus on loving it.

Guest review contributed by Book Whore Book Blog. This book blogger doesn’t go anywhere without a book and doesn’t leave the library without another dozen.