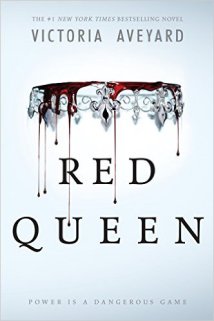 This is a world divided by blood – red or silver.

The Reds are commoners, ruled by a Silver elite in possession of god-like superpowers. And to Mare Barrow, a seventeen-year-old Red girl from the poverty-stricken Stilts, it seems like nothing will ever change.

That is, until she finds herself working in the Silver Palace. Here, surrounded by the people she hates the most, Mare discovers that, despite her red blood, she possesses a deadly power of her own. One that threatens to destroy the balance of power.

Fearful of Mare’s potential, the Silvers hide her in plain view, declaring her a long-lost Silver princess, now engaged to a Silver prince. Despite knowing that one misstep would mean her death, Mare works silently to help the Red Guard, a militant resistance group, and bring down the Silver regime.

But this is a world of betrayal and lies, and Mare has entered a dangerous dance – Reds against Silvers, prince against prince, and Mare against her own heart…

I totally had no idea Red Queen would make me love the book itself so much (though this review will be shorter than usual because I binge-read this so I can have time to read a book for one of my classes in school).

First things first, I think I need to tell you guys that I’ve asked for spoilers on this book – and by spoilers, I mean the major ones. Yes, including that thing at the end with the queen and You-Know-Who.

But nevertheless, that doesn’t mean I didn’t enjoy reading the book. (I was willingly asking for those spoilers, anyway.)

Red and Silver, and stronger than both
I have to say, Red Queen is definitely fast-paced, which is equally a good thing and a bad thing for me. A good thing, because it keeps me reading for more since almost everything is so intense. But a bad thing because I couldn’t connect with some parts or characters along the way, which is most probably why I couldn’t give this book 5 stars.

For example, Cal’s love for Mare. I didn’t even feel it until he kissed her in that chapter while they were practicing how to dance. All along I was thinking “Maybe he just really cares about her as a friend or a pitiful girl.” But nah, of course he falls in love with Mare, who am I kidding.

I was more convinced with Maven and Mare’s romance, however, which, well… If you’ve read the books, you know how it goes. Quite… sigh.

For Julian, I really liked how he acts like a father figure to Mare while she’s stuck in the palace. I have a feeling his appearances in this series doesn’t end on Red Queen, though. I surely hope I’ll get to see him again on Glass Sword. I’ve come to really like him (as a character, I mean).

I also loved what kind of superpowers were chosen for each Silver mentioned in the book. At first, it sounds like they’re basically unstoppable and can practically invade the palace if they wanted to (which is probably true), but still, they have limits and weaknesses.
There’s so much more I want to know about the Scarlet Guard and Mare’s brother, since finishing the book basically left me wanting for more. So I’ll be reading the second book, Glass Sword, this year for sure.

Guest review contributed by Mara Was Here. Mara Was Here is a book blog that reviews books–mostly YA–and talks about anything bookish, as well as publishing discussion posts and other features.