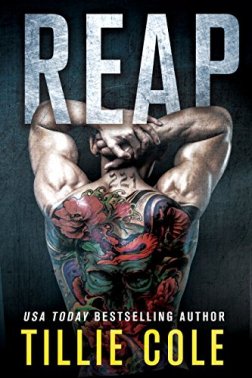 Raised as a prototype for the Georgian Bratva’s obedience drug, 221 fails to think, act, or live for himself; he’s his master’s perfectly-crafted killing puppet. Standing at six-foot-six, weighing two-hundred-and-fifty pounds, and unrivaled in to-the-death combat, 221 successfully secures business for the Georgian Mafiya Boss of NYC, who rules the dark world of the criminal underground. Until his enemies capture him.

Talia Tolstaia dreams to break from the heavy clutches of Bratva life. She dreams of another life–away from the stifling leash of her Russian Bratva Boss father and from the brutality of her work at The Dungeon, her criminal family’s underground death-match enterprise. But when she stumbles upon her family’s captive who is more monster than man, she starts to see the man underneath. A powerful, beautiful, damaged man whose heart calls to hers. But sacrifices must be made–blood for blood…life for life…souls for scarred souls…

OMG!! Reap has stolen my soul!
#221… broken, beaten, abused and lost forever! That is until Raze finds out about his existence. His blood brother’s twin brother… Raze is barely functioning as he wants to avenge his death… and by saving #221, that is a huge stepping stone in restoring his sanity.

Talia, Raze’s sister is front and center in this story. She needs some time away from the Bratva Life… she seeks seclusion and solitude. That is immediately broken when his brother brings Reap to her refuge…
She is immediately curious and compassion wins out as she sees this beast chained to the wall. There is some insane connection between them, instantaneous and all consuming and Talia can not fight it as much as she tries….

It is a heartbreakingly beautiful love story, and my soul bled for Reap… his loss, his pain, his stolen life. Days later and I just can’t stop feeling all of it!

Guest review contributed by Perusing Princesses. Along with their book reviews, this blog features monthly authors (and their books) in their spotlight section. Their website’s forecast is sunny and pink with a chance of glitter.