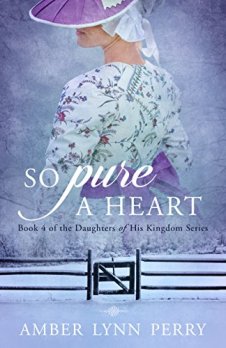 Since the night her dear uncle gave his life for hers, Hannah Young is determined to risk everything by spying for the Patriots in order to seek retribution against the British soldier who killed him.

But when her former love, Joseph Wythe, insists on ensuring her safety, she must decide if the vengeance she seeks is worth the danger of his nearness. For the love she once felt is liable to grow deeper and more threatening to her heart than it ever was before.

Leaving his young ward to join the fight for liberty is the hardest thing Joseph Wythe has ever done. Nearly. The most difficult happened ten years past, which he tries his best to forget.

Seeing Hannah Young again after all this time does something frightening and wonderful to his soul. Though her determination to spy for the Patriots is honorable and brave, he will never allow her to take such a risk without him to protect her, no matter how she protests—and no matter how he knows he will ache all the more for the thing he always wanted and still could never have.

Excerpt from Chapter One:

Alone, Hannah Young stared at the dirt-covered mound as the chilled air breached the warmth of her heavy cloak.

The words her uncle had spoken not an hour past replayed in her mind and held solid the reality she wished not to accept, but must. Her dearest aunt Bea, her friend and confidant—the woman she’d loved as a mother—was never coming back.

Hannah looked up, gazing across the lonely hill, straining to gather any rational thought through the thick fog of sorrow. At the sight of the house a hundred paces away, and Uncle Ensign nearing the plot where she stood, Hannah’s eyes burned. There was nothing they could have done to save her. ’Twas Bea’s time, and God had called her home. Such knowledge should strengthen, should it not? Lowering her head, she smoothed her cold fingers around the soft emblem in her hand. It should, but it would never quell the pain. That she knew. For still she grieved the loss of ten years past, as if ’twas only yesterday.

“Hannah, you should not still be here.”

She glanced up at the sound of Ensign’s voice, then turned again to Bea’s cold resting place. “Perhaps.” She could say no more without weeping.

“The others have long since returned home. As should you.” He put his arm around her shoulder and pulled her close as the gray clouds mourned over them. At long last his heavy tone returned to mingle with the air. “She loved you, my dear. More than you can ever know.”

Nodding, Hannah’s throat grew thick, impeding the reply that wished for release. And I her.

Ensign cleared his throat, but still his words came out thick and broken. “We shall always have the memories of our dear Beatrice. And though she is gone from us in this life, I know we shall see her in the next.”

Hot streams of tears rolled over Hannah’s cold cheeks. “You have such faith, Uncle.”

He released a quivering breath before his solemn reply. “I could not bear the grief if I did not.”

Hannah allowed his words to rest in the wintery air, consumed by both love and heartache, before the thoughts she’d been forming found shape in her voice. “She was so good to me. She loved me anyway.” Hannah glanced down at the tiny knitted booties in her hand, speaking through the tears she could no longer restrain. “Both of you loved me despite everything, and I could never repay such kindness, no matter how I tried.”

He tightened his loving grip and whispered in her ear. “There is nothing to repay, sweet child. She loved you as her own, as do I.” He coughed to clear his throat and straightened his stance. “Your father gave up a great treasure when he left you to us. He is a lost man. We must pray for him.”

The tears halted at the mention of Philo Young, and she glanced up, unrepentant for the truth that spilled out. “I fear I have given up praying for him. He will never…” She couldn’t finish the rest.

“Forgive me.” Ensign looked down at her, the deep lines around his eyes flaring before he kissed her temple. “I should not have mentioned it. I know how it pains you.”

She glanced down at the booties once again and tried to speak through the strain in her throat. “That is not all that pains me.”

An audible sigh left him, and he pulled her closer. “I know.”

Hannah inhaled a choppy breath, attempting to cleanse away the dark clouds that closed upon her mind. “At times…at times it seems as though ’twas only yesterday. Then in the next breath, I feel ’twas a different lifetime.”

The memories she wrestled gathered hard and fast, like storm clouds darkening an already bitter night. She shifted her feet and tucked the booties in her skirt pocket, attempting in vain to tuck away the thoughts with equal ease. “Without Bea—without you both beside me—I…” I would not have lived. Hannah looked away, unable to finish the thought aloud. “And now I shall never again be able to tell her how much I loved her, how grateful I am, how I shall never forget her.”

Ensign released his hold and brushed his knuckles against her cheek. “I heard you speak such to her every day.”

“Dear child.” He kissed her hair once more, then moved back, one hand still on her shoulder. “You must return inside—I beg you. You have been too long in this chill.”

He turned and started down the hill, but she called after him, the cold slowing her lips as she spoke. “Only a moment more, Uncle. I cannot leave her just yet.”

Ensign stopped and glanced back at the grave, eyes red. Not moving his gaze, he answered her request with a pained smile to hide the quivering of his chin. Wiping a stray tear from his cheek, he took in a long breath, blinking as if he still struggled to accept the truth, the same as she. His mouth tightened, and he offered a quick nod before striding down the slight slope toward the house.

The cold cinched harder, stinging Hannah’s cheeks as she stared at the earthen catacomb of her only and dearest friend. She looked up, blinking against the moisture in her eyes. She had Ensign, true. And Caroline. But her cousin was in Sandwich, and though their treasured letters brightened every week, Hannah could not fathom how she would endure every day without Bea’s smiles and humor, her light and wisdom.

Again, she dropped her gaze, recalling Caroline’s most recent pleading. Nay. She hugged her arms around her chest under her cloak and rubbed them to fight against the cold. Never would she return there, no matter how her dearest cousin begged, no matter how lonely the years ahead might prove. Sandwich was the place of her youth, the place of her formative years, aye. But ’twas the place where her past still lived and breathed.

She reached into her pocket, eyes trained on the clouded horizon. Circling her fingers against the memory, she pushed back the bitterness that pressed against the doors she’d hidden it behind. Here in Plymouth she had discovered the meaning of true caring, true love of family.

Hannah tightened her fist around the soft wool as the face of the one man she longed to forget filled her vision as real as if he stood before her. She looked to the house to escape the illusion of him, but it lingered, forcing the imprisoned emotions to cry for freedom.

Twas as much your doing as his, was it not?

The wind whipped harder now, signaling the need to find refuge indoors. Loathing to part, Hannah blew a kiss toward the lonely mound, grateful, almost, for the distraction that allowed her to leave her post without weeping.

Walking across the snow, she gripped her cloak, shivering as the memories thumped harder in her chest. Ten years had passed, and still she thought of him. Foolish. For surely he thought not of her.

At the back step she clutched the handle, breathing away her past before she could enter. The light from the house peeked through the small cracks in the wood, like her hope that refused to die.

She grasped the handle tighter and pushed the door open.

She had forgiven him, aye. But she could never, ever forget.

Check out So Pure a Heart here.

One thought on “So Pure A Heart – Book Review”