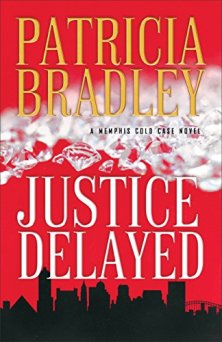 It’s been eighteen years since TV crime reporter Andi Hollister’s sister was murdered. The confessed killer is behind bars, and the execution date is looming.

But when a letter surfaces stating that the condemned killer didn’t actually do it, Detective Will Kincaide of the Memphis Cold Case Unit will stop at nothing to help Andi get to the bottom of it. After all, this case is personal: the person who confessed to the crime is Will’s cousin.

They have less than a week to find the real killer before the wrong person is executed. But much can be accomplished in that week–including uncovering police corruption, running for your life, and falling in love.

With the perfect mixture of intrigue and nail-biting suspense, award-winning author Patricia Bradley invites her readers to crack the case–if they can–alongside the best Memphis has to offer.

“He should have killed Andi Hollister instead of knocking her out.”
Even though they’re light on romance, I love Patricia Bradley’s suspense novels. Yes, you read that correctly and no, I haven’t been taken over by a pod person ; – )

There’s always just enough romance satisfy those like me that find it difficult to read a book without any but not so much that it turns away those who don’t like being distracted from the suspense. In fact, it heightens the tension all the more for having that undercurrent of romance present in the story.

And there be tension galore in Justice Delayed!

Along with the romantical kind (not just one couple either!), there’s of course the action-and-suspense kind. But there’s also the added tension of racing against the clock to save a possibly-innocent death row inmate from being unjustly executed. Making that tension even thicker is the fact that Detective Will Kincaide’s cousin is the death row inmate in question. And the crime for which he’s about to be executed? The brutal murder of Andi (Will’s love interest) and Brad (Will’s best friend) Hollister’s sister Stephanie years earlier.

There are lots of suspects and not many of those that I could easily eliminate as I tried to solve the crime along with our cold case team (Will, being the only official member lol). Mysteries that keep me guessing are my favorites, and this one is nicely done! Enhancing the drama are the well-placed and well-written flashbacks that Bradley incorporates into the present-day narrative – as well as the chilling scenes told from the killer’s perspective.

Bottom Line: If you like a little bit of romance mixed with your suspense (whether you put the emphasis on ‘little bit’ or on ‘romance’), Justice Delayed will give you the best of both worlds. From the cold case to the present one and all the details in between, the tension remains high from the first word ’til the last. Because this is the first book in a new series, there are a bevy of characters to meet and not every subplot is tied up neatly at the end. Don’t worry, though! The main storyline is brought to a page-turning conclusion, and I expect that the hanging threads will be ongoing throughout the series. I’m already looking forward to the next book!

(I voluntarily reviewed a complimentary copy of this book which I received from the publisher. All views expressed are only my honest opinion.)