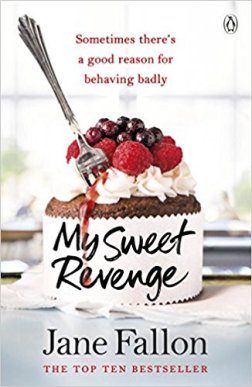 I want to make my husband fall back in love with me.

Let me explain. This isn’t an exercise in 1950s wifeydom. I haven’t been reading articles in old women’s magazines. ‘Twenty ways to keep your man’. That couldn’t be further from the truth.

I want him to fall back in love with me so that when I tell him to get the hell out of my life he’ll care. He won’t just think, ‘Oh good’.

I want it to hurt.

Paula has had Robert’s back since they got together as drama students. She gave up her dreams so he could make it. Now he’s one of the nation’s most popular actors. And Paula’s just discovered he’s having an affair.

She’s going to remind Robert just what he’s sacrificing. And then she’s going to break his heart like he broke hers. It will be her greatest acting role ever.

Revenge is sweet. Isn’t it?

Firstly, isn’t the cover of this book amazing and make you feel like cake every time you look at it?! The main character works in a bakery! Plus there is the play on “sweet revenge” of course! This is the type of book I would read without looking at the blurb. (#CakeLove!). But I did read the blurb, and that made me want to read it even more.

The main character Paula has been married to Robert for many years, but all is not as it seems when she finds out he is having an affair with a co worker. Paula makes a decision that I imagine would make a good book club discussion – she decides not to confront him, but to make him fall back in love with her, and when he does, only then will she tell him she knows and she is leaving! (No spoilers, we know this straight away). The tale continues with the way she inflicts her revenge! These ways are quite ingenious, and with the help of her boss Myra they come up with quite a few funny and empowering ideas.

We also meet the dastardly mistress! She is as to be expected unlikable! But then so is Robert, the cheating Husband. I guess reader’s opinions will be affected by how they consider cheating on your spouse, I took a dislike to them both straight away.

I loved reading Paula’s plans and ideas and how she became stronger throughout the book. It is kind of a personal journey for her to better herself, to become the person she wants to be, while reminding Robert what he will loose. It was a good bit of escapism reading, putting myself in someone else’s position, when something horrible happens, but instead of rolling over and falling apart, Paula becomes stronger. I can’t imagine many women I know going this way about when they hear their spouse is cheating with their co worker, watching him go to work and stay back late every day with her!! But it is fiction, and that is the point of letting the fictional characters do, what some of us would imagine doing. The slow cold dish of revenge! I loved it.

This is the first book I have read by Jane Fallon, but I will be sure to looking out for more of her books. I know she has already written quite a few, so any recommendations on her other brilliant ones would be appreciated.

Have you read this book? Or any other of Jane’s? Could you hide the facts you had found out of an affair? Or could you plan out a devilish plan of revenge? I’m intrigued to know. This would be a great bookclub book!

Guest review contributed by Chocolate Pages. The best things in the world are books, chocolate, and baking…or at least, so says this blogger. That sounds pretty good to the rest of us too.