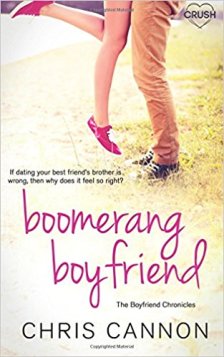 Working with her best friend’s brother at Betty’s Burgers, free-spirited Delia starts to see Jack in a new light. Not only has Jack-the-Jerk turned into a hottie, he’s even acting like a niceguy, who rescues dogs and knows how she likes her coffee. But if Jack is into her, then why is he keeping her a secret? Of course, if her best friend doesn’t approve, Delia could lose the only family she’s ever known.

Seeing Delia in her retro waitress uniform throws Jack’s world out of whack. She’s always been just another pain in the butt little sister…not a datable female. But she’s rockin’ the Pie Princess tiara, and even her hot-pink striped hair is sexy. What’s that about? He needs to get his head on straight, because artsy, funky Delia and her nonconformist ways don’t fit in his safe and ordered world.

Disclaimer: This Entangled Teen Crush book contains kisses that make the world fall away and snarky humor that may cause you to LOL in public places.

I try not to get mad at books, but I have to say I’m pretty mad at this one, because I was so close to finding a new book boyfriend and he practically got ripped out of my hands last minute.

Like I mentioned in my last review of an Entangled Teen (Crush) title, I can often count on them to bring me sweet and cute YA romance stories. This started out like that. Boomerang Boyfriend attracted my attention with the “falling in love with my best friend’s older brother” trope, and kept it when I first met Jack.

Jack-the-Jerk, like the MC Delia called him, wasn’t a jerk at all (not until the 85% mark, at least). Sure he had the brooding teen thing going on, but I love that, so I didn’t mind. But most of all, Jack was a dog person. A true dog person. His actions and thoughts when around Rocky, his best friend’s dog, was just too adorable. Right from the beginning I saw Jack was a boy after my heart.

I squatted down and rubbed Rocky’s ears. “I bet you were framed, huh, buddy?” He leaned into the ear rub and sighed. “I bet it was the cat, wasn’t it?” He sighed again like he was agreeing with me.

Then came the whole story with his grandfather and his father, and the way he thought he was losing his mother, too, and I was ready to hug him because my heart hurt for him.

Up until the 85% mark, I was in love with Jack. So in love with him that I found it easy to ignore how unlikable Delia, the other main character was. I was in it for Jack and nothing mattered. But, then…the jealousy/pettiness plot kicked in and Jack lost major points with me. Worst of all, it felt so out of character. He hadn’t come across as the kind of guy that would throw a hissy fit over something so small as Delia refusing to share a secret that wasn’t even hers with him. I honestly thought the whole thing felt contrived and ruined his character, which was a shame.

I still like Jack, but it’s disappointing to go from love to like here because of something so silly.

As for Delia, I can’t say I felt as bad for my change of heart. I thought she was an interesting character in the beginning, because she had the “I don’t care what other people thing” attitude and she even made it sound genuine. But then she turned into a little monster early on, and she completely lost me.

I went from annoyed to mad with Delia pretty fast. She came across as selfish and immature when she poorly dealt with the situation with Aiden. The guy was sharing a huge secret with her, and explained why it was a secret, and instead of being a friend, she was only worried about herself. Besides, it wasn’t as if she had been so in love with him that his rejection really hurt her. It was just a crush. So get over it already, girl! Maybe I could’ve forgiven her if she had shown Aiden a little more support as the story progressed, but in all honesty she only got worst.

In fact, I was way more into Jack’s chapters and his interactions with his best friend and the dogs (plural, because he adopted one for himself) than anything about his relationship with Delia. It simply didn’t work for me, because I had no sympathy for Delia at all.

I truly enjoyed all of Jack’s scenes with Trevor, Rocky and Buddy (the puppy), and I wish the book had been about those two best friends and their amazing dogs being adorable together. Someone write me this book:

If it had been, and if Jack hadn’t been ruined at the end, I wouldn’t rated this book higher (even though the writing was too simplistic for my taste) and added Jack to my book boyfriend list.