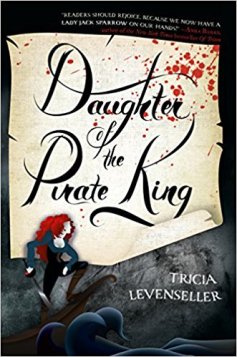 There will be plenty of time for me to beat him soundly once I’ve gotten what I came for.
Sent on a mission to retrieve an ancient hidden map—the key to a legendary treasure trove—seventeen-year-old pirate captain Alosa deliberately allows herself to be captured by her enemies, giving her the perfect opportunity to search their ship.

More than a match for the ruthless pirate crew, Alosa has only one thing standing between her and the map: her captor, the unexpectedly clever and unfairly attractive first mate, Riden. But not to worry, for Alosa has a few tricks up her sleeve, and no lone pirate can stop the Daughter of the Pirate King.

I first received The Daughter of the Pirate King via the March Owlcrate, themed “Sailors and Ships and Seas”. It’s been sitting on my shelf in the four months since, untouched. But for the #C2CReadathon2017, challenge #11 is to read a book you have, but didn’t pick up yourself. Hence why I picked up The Daughter of the Pirate King for my road trip TBR on my way to North Carolina.

I didn’t really have any expectations going in. Beyond excitement at the “Lady Jack Sparrow” comment on the front cover, I was just looking to sit down and be entertainment by the antics of a brassy female pirate. But it wasn’t long before I was completely wrapped up in Alosa’s story. Beyond a simple pirate story, I really enjoyed Tricia’s exceptional writing and Alosa’s hilarious shenanigans.

To my pleasure, this brazen female pirate bore a strong resemblance to Celaena Sardothien! If you liked the Throne of Glass series by Sarah J. Maas, I really think you will love this pirate-y adventure! The authors don’t have the same writing style, and barely share a genre. But there’s no question that The Daughter of the Pirate King is surprisingly reminiscent of TOG in terms of plot progression and female strength in characterization.

I absolutely adored Alosa – she never gave up and refused to accept defeat in all things. She was exceptionally loyal, morally grounded and always had a trick (or five) up her sleeve. Alosa’s pride was also exceptionally fun to witness. There was no beating this girl, she wouldn’t allow it. Not to mention, this was one Pirate who valued hygiene and sanitation. Most fun, however, was her burst of pure spite and attitude. If she was upset with you, she will let you know. Not necessarily with words either, but in the most glorious series of actions that had me roaring. *Like when Rixen locked her in his room and she responded by drawing horrible sketches over all of his maps and trashing his room to smithereens.

The characters in this book were pure fun, and I had an enjoyable time. If you’re slumping after your latest Maas hangover, I highly recommend you pick up The Daughter of the Pirate King. What would be better to cure it than the Celaena Sardothien of the seas?

Guest review contributed by Cover to Cover Lit. This book blogger doesn’t go anywhere without a book and doesn’t leave the library without another dozen.