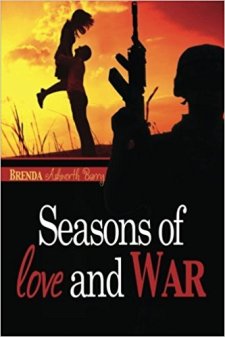 SEASONS OF LOVE AND WAR is a historical family saga and epic love story. Childhood sweethearts Beth Ann Rose and Kaylob Shawn O’Brien just want to get married and pursue their dream careers, but the Vietnam War changes everything when Kaylob is drafted into the Army and declared dead. Beth Ann has a complete emotional melt down and starts to have visions of him in the jungles of Vietnam. Is he alive or has she completely lost her mind?

Kaylob, Beth Ann, and Blake are the three main characters. Although I liked both Kaylob and Blake to certain extents, I couldn’t bring myself to like Beth Ann. She reminded me as a lead in a trashy soap opera. By the end of the book I absolutely loathed her – to the point that I didn’t think she deserved anyone and I wished very much that things end poorly for her.

She was not what I would define as a strong woman. Her reaction when Kaylob first goes missing was absolutely over the top. Most of her actions, in one way or another, were understandable  in some regard, but it was the way she handled them that was STUPID. She was a spineless selfish little creature that I hope ends up dying in a horrible way to match her horrible little personality – very similar to my emotions toward Catherine of Wuthering Heights.

The supporting characters were fine, I actually liked Jake and Carol. I won’t even mention her long term friend because I’ll just start another rant on how much I disliked Beth Ann. Plus I don’t want to ruin any of the story.

Very interesting plot. The historical aspects of this book seemed to spot on. Anything I wasn’t 100 sure of, I actually googled really quickly and was impressed that the author did their homework. A hurrah because this was presented as a more historical novel.

Wanting to find out what happened to Kaylob was hands down the number one reason I went through the book. I didn’t realize when I picked this book that it couldn’t stand alone. That was very disappointing because more than once I thought “was that really necessary?” Though that may have been due more to my dislike of the main character.

The war zone pieces were great…but they were entirely centered on Kaylob’s love for Beth Ann. I get that it was their connection – but for a historical novel I thought we’d see a little more of what was happening to him and his fellow soldiers.

What we did see were some of the best parts of the novel and I absolutely love Kaylob for them. Where the author failed with Beth Ann in my eyes, Kaylob was wonderful. Not perfect, but wonderful. Plus I’m not 100% sure where the author was going with the more supernatural part of the book with Beth Ann’s visions. You’ll see what I mean.

The writing was well done and easy to follow. The plot wasn’t perfect but did keep me engaged. I would point out that a few parts felt a little convenient – like when John Patterson calls Beth Ann. I also felt there were a few logical fallacies that were overlooked, but most of them were minor and had to do with Beth Ann’s decision making in general.

The historical references were spot on as far as I could tell – which was a huge win in my mind. I truly thought that my general dislike of Beth Ann would fade as the author built the character up and made her stronger. Instead she kept her a pouting selfish brat, who I could never sympathize with because she always seemed to be using those who were good-natured.

If you like Wuthering Heights or soap operas you will love this book – it just wasn’t my favorite. As a historical novel this was a win, but as a romance for me it was an epic fail.

Guest review contributed by Creating Worlds with Words. This blogger offers book reviews as well as chapter critique exchanges. Occasionally, portions of her writing appear in the feed.