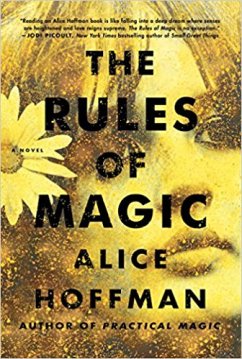 The Rules of Magic by Alice Hoffman

For the Owens family, love is a curse that began in 1620, when Maria Owens was charged with witchery for loving the wrong man.

Hundreds of years later, in New York City at the cusp of the sixties, when the whole world is about to change, Susanna Owens knows that her three children are dangerously unique. Difficult Franny, with skin as pale as milk and blood red hair, shy and beautiful Jet, who can read other people’s thoughts, and charismatic Vincent, who began looking for trouble on the day he could walk.

From the start Susanna sets down rules for her children: No walking in the moonlight, no red shoes, no wearing black, no cats, no crows, no candles, no books about magic. And most importantly, never, ever, fall in love.

But when her children visit their Aunt Isabelle, in the small Massachusetts town where the Owens family has been blamed for everything that has ever gone wrong, they uncover family secrets and begin to understand the truth of who they are. Back in New York City each begins a risky journey as they try to escape the family curse.

The Owens children cannot escape love even if they try, just as they cannot escape the pains of the human heart. The two beautiful sisters will grow up to be the revered, and sometimes feared, aunts in Practical Magic, while Vincent, their beloved brother, will leave an unexpected legacy.

I was a little unsure about reading this one because I wasn’t a huge fan of Practical Magic (the book… I happen to love the movie adaptation however). But I actually found myself fully engrossed in this book and read it in less than 2 days.

I loved seeing Franny, Jet, and Vincent grow up and how each of them treated the magic that was within them. My heart broke for each one of them at one point or another during the book. Franny was rather uptight, but you could still catch glimmers of the vulnerability she felt, knowing that she could never fully be with her love because of the Owens curse. And Jet, such a sweet girl who loses her way and eventually finds her way back. Vincent at first seemed just like a spoiled rotten youngest child, but deep down he had the same struggles as his sisters.

There were a few parts that I felt moved rather slowly and probably could have been left out but overall I was very pleased with this book and see myself reading it again someday in the future.

I was so happy to see Franny and Haylin get to share the rest of his life together.  She really blossomed when he was there with the Owens sisters in the old house. I think one of my favorite things was watching Jet and the Reverence overcome their differences to mourn Levi together.  Seeing Vincent finally come into his true self when he met William was delightful. I was so worried that would have had a sad ending, but Vincent got his happy ending.

I received a copy of this book through NetGalley in exchange for an honest review.

Guest review contributed by  The Worn Bookmark. Maren posts book reviews and tags, and she participates in challenges and read-a-thons. A book store or library is her paradise.

2 thoughts on “The Rules of Magic – Book Review”