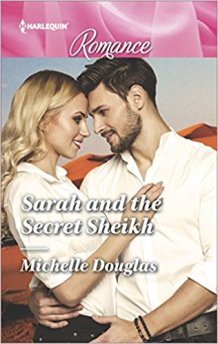 Sarah and the Secret Sheikh is a romance that hits a fair few of the tropes – sheikh romance, secret baby romance, etc.  It also does a fabulous job of turning some of those tropes upside down.

Sarah is your everyday Australian girl, but a one-night-stand with Majed, the enigmatic and sexy man looking after her friend’s bar for a while, leaves her pregnant and unsure of what to do next. Admitting the truth to Majed brings a whole new set of issues into play when he confesses that he’s the heir to Keddah Jaleel, a small but wealthy Middle Eastern nation.

Well-educated and having lived in the West for a large part of his life, including the last four years since his brother’s murder, Majed had a whole heap of issues, but being a domineering type isn’t one of them. He has a few moments where he thinks He Knows What’s Best, and Sarah absolutely sets him straight in all of them. One of my favourite lines in the book was when he tried to mansplain her own feelings to her and she jerked him up short.

“That’s the kind of privileged-male superiority that seriously ticks me off! Oh, the poor little woman can’t possibly know her own mind – she’s just a hysterical female! I’ll tell her what she really thinks because she’s not clever enough to think for herself!”

I totally stood up and cheered. Brava, Sarah. And she doesn’t change in the rest of the book; she has her own insecurities and issues, but at no time does she ever give way on her principles. She’s a magnificent heroine, and to his credit Majed recognizes that and doesn’t try to rein her in at all (except when she was in danger, when his own protective instincts got the better of him… and then Sarah was a self-rescuing princess and I fell in love with her all over again).

While I adored the characters in this book, there were a couple of things missing which felt a bit like a gaping hole in the plot. Anyone even thinking about moving to the Middle East is surely going to ask some hard questions about Muslim extremism even if not specifically naming ISIS, and I also found it hard to believe that Sarah could marry into the ruling family of such a nation without being required to convert to Islam, something which was never brought up either.

This is a light and fluffy romance, but completely ignoring real-world issues jars the reader out of the story a little, leaving them wondering how the protagonists would manage these problems they are surely going to have to face.

I thoroughly enjoyed the characters, but the plot holes left me feeling a little dissatisfied at the end of the book. I’ll give it 4 stars.

2 thoughts on “Sarah and the Secret Sheikh – Book Review”