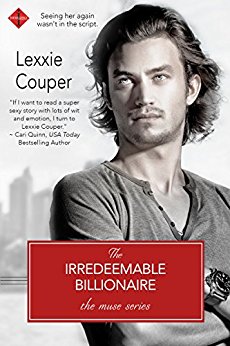 I first met Sebastian Hart in Lexxie Couper’s earlier book The Mistaken Billionaire, where he was introduced as the Australian film director who books into hotel rooms as “Mick Dundee” (aka Crocodile Dundee) to maintain anonymity. Which gave me the impression that he was most likely an irrepressible joker with a great sense of the ridiculous.

That impression is certainly borne out in this book, where we get to meet Sebastian again, this time through the eyes of Grace, single mother to Cody, to whom Sebastian is assigned in the Big Brother program when he is given community service following a drunken prank.

The only problem is, Grace knew Sebastian long ago. He was the hateful boy next door who mercilessly teased her – “Tinsel Teeth” for having braces being just one of his taunts – and his actions since then have only further demonstrated to her that he is still the entitled brat she knew way back when.

It takes Sebastian a long time to figure out that his actions so long ago were spurred by feelings that had nothing to do with dislike. By the time he gets there, he’s managed to make a thorough mess of things with Grace – again – which takes a gesture of the grandest kind to undo.

I was utterly charmed by both Grace and Sebastian – and Grace’s son Cody, who as the mother of an eleven-year-old, I can attest was very realistically portrayed. This is the best Billionaire series I know, and anyone who loves a story of a wealthy guy falling for an ordinary girl and discovering that he needs to prove himself worthy of her (the Mr Darcy trope) should absolutely read this book. It’s charming, hilarious and a perfect antidote to real-world stress. Five stars.

One thought on “The Irredeemable Billionaire – Book Review”