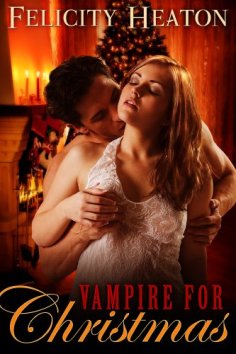 What the Story is about.
The story introduces Rafe a vampire/vampire hunter and Shannon a demon hunter. They have worked together for two years. Their relationship was unconventional has Shannon hates vampires.  A vampire killed her family several years ago and since then she made it her mission to destroy them. As such, being partnered with one did not sit well with her.

However, the more time she spent in Rafe’s company she realised he was not the bloodthirsty killer she thought him to be and in the process her feelings towards him changed. Afraid to face these feelings, she is determined that their current mission will be their last one as partners.

Rafe has no desire for their partnership to end. He is in love with her and hopes to prove to her they belong together. However, he only has a few days to do so, but the appearance of a slimy demon intent on disrupting Christmas puts a kink in his plans. Will he get the chance to win her heart before it is too late and defeat the demon in the process?

Vampire for Christmas has been on my shelf for a while and I have no idea why I waited so long to read it.  Well, thanks to the HoHoHo
read-a-thon it finally made it on my reading list. I went in to this book with high expectations, after all it is written by Felicity Heaton and she did not disappoint.

The Story
Vampire for Christmas is a short and sweet romantic story.  Humour, action and heart-warming scenes flowed through the pages.  In spite of it being a short story, it did not feel as if anything was missing. The story was complete. The characters knowledge of each other prior to the start gave credibility to their romance.

Characters.
For a short story, I thought the characters were well-developed. Shannon’s conflicted emotions as it relates to Rafe leapt off the pages. She feared admitting her feelings, but she was afraid of ending their partnership.  I thought they were great together, which was evident from how in sync they were when out in the field. In addition, they brought out the best in each other. The more time she spent in his company, Shannon realised he differed from other vampires. Knowing her motivated Rafe to become a better version of himself.

Conclusion/Recommendation
Overall, this a was lovely Christmas story and one I would recommend for fans of paranormal romance.

One thought on “Vampire for Christmas – Book Review”