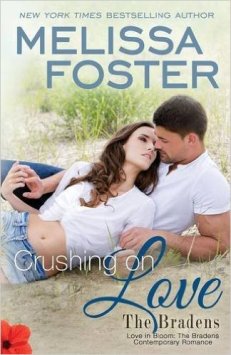 Book #4 The Bradens of Peaceful Harbor

Steve Johnson is living his life’s passion watching over the Colorado Mountains as a ranger and wildlife consultant. But his peaceful life is upended when overzealous and insanely beautiful Shannon Braden flits back into his life after returning from a brief trip home to Maryland.

He thought his attraction to her was under control—after all, she’s only in Colorado temporarily, and he doesn’t do casual affairs.

Shannon’s return to Colorado has as much to do with the game of cat and mouse she and Steve have been playing as it does the data she’s been hired to collect. But despite her efforts to explore the undeniable heat simmering between them, Steve’s intent on keeping his distance.

When a ranch abutting the national park goes up for sale, Steve will do whatever it takes to keep it from falling into the wrong hands. And when all his attempts fail, he’s left with no alternative but to follow Shannon’s guidance into the online world he abhors in order to raise the funds. The more time they spend together, the deeper their attraction becomes, and a game of cat and mouse turns into an unstoppable connection. But when Shannon’s assignment comes to an end, will it mean an end to them, too?

I received this book to review through Beck Valley Books Book Tours, all the opinions above are 100% my own.

I have officially found a new book boyfriend. I am so crushing on Steve Johnson right about now. The man is fine in every sense of the word.  I consider him to be the total package. He is kind, caring, sensitive, protective and manly. All I can say is Shannon Braden is one lucky woman. How many men would be willing to step outside their comfort zone to please the woman they love? I am not sure of the answer to that question, but Steve Johnson is one such man.

It was evident from the start of the book that there was chemistry between Steve and Shannon. They knew each other before, so this connection was not an instant thing. It had been brewing for several months. Steve, however, was wary of risking his heart where Shannon was concerned.

He considered her to be off limits due to the miles that separated them and the fact that they both viewed life differently. He like his solitude and rarely socialized, while Shannon was the type of person who needed people around her. She strived on socialisation.  She, however, was determined to pursue the attraction between them to see if it would amount to anything.  Steve had no idea that his world was about to change in ways he would never have never expected.

I knew going into this book that I would be in for a sweet romantic ride with a little steam added for good measure.  You may be wondering how I knew this. Hello! It’s Melissa Foster we are speaking about here.  The moments between Steve and Shannon were not only sweet but hot as hell. It’s a wonder my kindle did not combust. I have not been able to read all her books, but, for those that I have read the thing that has remained constant is her ability to pull me into her stories and have me completely invested in the lives of her characters. As a result, I can never seem to get enough of them. Steve and Shannon’s story was no different.

I so wanted to see these two get their act together. I hoped that they would eventually realise that any obstacles to their relationship would be the ones they chose to erect. Love is a powerful emotion and it can move mountains and traverse distances. They would have to be willing to make it work. There was no drama which allowed for the romance to move along smoothly. The only thing I had to worry about was the steps they would take to ensure that they both got the happiness they deserved.

This installment is a great addition to the series. It can be read as a stand-alone, however, I would recommend that you read the previous books in the series to learn more about the supporting characters.

If you enjoy sweet and steamy contemporary romances, then you will love this book. For that matter I think you should go and buy the other books in the series as well, I am sure you will enjoy the journey.