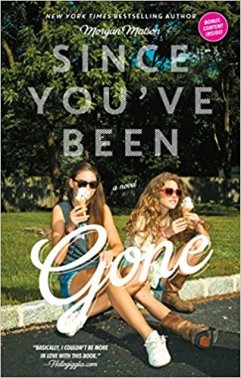 One of the reasons I read this book is because it reminded me of the song by Kelly Clarkson. Just like I loved the song, I loved the book too. 🙂

Summary:
The story revolves around a girl nalike Emily. She has a best friend named Sloane who she does everything with. They had an epic plan to have the best summer ever but then, Sloane, along with her entire family, disappears. She doesn’t respond to calls, texts or e-mails –  she’s just dropped off the face of the earth.

A few days after she went missing, Emily gets a list in the mail with a bunch of crazy things written on it like – “Go skinny dipping” and “Kiss a Stranger.” Emily knew it was from Sloane since Sloane often made these lists for her. Emily feels like if she does everything on the list, she’d somehow find Sloane.

Whilst completing everything on the list,  she makes some new friends and has a realisation about how lost and lonely she was without Sloane. She also falls in, not love exactly, can you say someone fell in like?

Review: [No spoilers]
I loved this book. It took me a little time to get into the story because the writing isn’t what I’m normally used to. The book is written very well but I couldn’t immediately jump into the story because the paragraphs and the chapters are really long and it’s been a while since I read a book with long chapters. I picked it up, read a few pages and put it down immediately several times but I did eventually plough through and get into the story. I also found the starting of the book a little dull but the story picks up it’s pace pretty quickly.

I loved all the characters – they’re all very quirky and fun. My favourite was probably Frank.

The story emphasizes how you should step out of your comfort zone and do things. Living in the moment is exalted.

In this book, we also see how people are different when they’re with different company. The Frank Porter Emily knew through school was way different from the one she came to know over the summer. Collins also said that Frank was different with Emily and Dawn when compared to how he was with him. Sloane was different with her boyfriend and with Emily.

Friendship is a very important part of the book. Friendships can be made as easily as by listening to someone talk about their breakup. I loved how quickly the characters became friends, I wish I could make friends that fast!

The romance in the book is quite predictable as most contemporaries are. I thoroughly enjoyed it, nonetheless. There are some really cute moments that make you just swoon.

I didn’t like the ending very much – I was expecting a better reason for Sloane’s disappearance than the one which was given to us. However, the explanation is quite believable unlike the many theories I had in my head.

I also felt like this book could be a little bit longer! There should have been an epilogue, at least! I want to know what happens to the characters after the summer is over!! There’s a little bit of a fight between the friends and I wanted to know whether that got resolved. The ending was just way too abrupt for me.

Overall, it’s a great book. A 4.5/5 from me. After I got used to the writing, I thoroughly enjoyed it. Definitely want to read more from Morgan Matson now. If you’re someone who likes contemporary books or wants to start reading contemporary – this is really good for you. It’s not your typical cutesy romantic YA – it’s more about finding yourself and growing as a person. It’s a fantastic read and I definitely recommend it!

Check out Since You’ve Been Gone here.

Guest review contributed by Bookish Babbles. This blogger is a self-proclaimed bibliophile and has been blogging since the 5th grade. In her bio she has recently quit quitting.