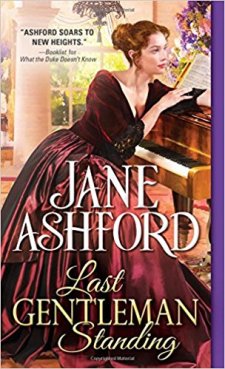 Last Gentleman Standing was originally published as Bluestocking in 1980. Knowing that, I’m inclined to be a little more forgiving of the few minor things that bothered me about this book (things like the protagonist being referred to as ‘the girl’ in speech tags and such).

Elisabeth Elham is a delightful heroine for any era. Raised poor but genteel, she is teaching at a private seminary for young ladies when a solicitor tracks her down and informs her that she is the sole heir of her wealthy, curmudgeonly uncle.

I thought, as I read the book, that what happened to Elisabeth must be rather like winning the lottery today. With your life suddenly transformed by enormous wealth, what would you do? Would you treat those around you with grace and respect, would you be able to recognize those of you who are only interested in you for your riches? And of those, would you prefer those who are open about their reasons for seeking your friendship, or those who lie and conceal?

Elisabeth handles her changed circumstances with grace and aplomb. Despite never having had any suitors before, she handles those who appear expertly. I have to confess that I was rather rooting for her to end up with a penniless but honest gentleman who treated her wonderfully, rather than the eventual winner. She honestly seemed to have more chemistry, and more fun, with the former.

While this book was originally written almost 40 years ago, it stands up at least as well as a piece of Georgette Heyer’s work. Read it with the understanding that it was written in a different time, and you’ll enjoy it as much as I did. Five stars.