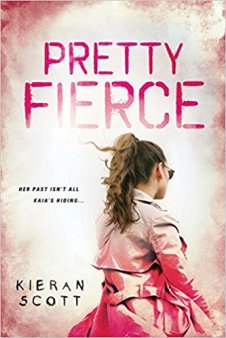 Kaia has been on the run her whole life. The daughter of professional assassins, she knows true danger—and she’ll do anything to survive. After her parents vanished during a job gone bad, Kaia’s spent the last year in hiding, trying to blend in as an ordinary teenager, and there’s no one who makes her feel more normal or more special than her boyfriend, Oliver.
But when she’s jumped by a hit man, and Oliver catches her fighting back, Kaia’s secret is exposed. In a split-second decision, she flees the small town, taking Oliver with her. With professional killers stalking their every move, can Oliver and Kaia protect each other long enough to uncover the mysteries of her past?

Pretty Fierce by Kieran Scott is described as an action movie in written form, so naturally I was intrigued. I have not read anything by Scott (or her pen name Kate Brian) has written before and I was unsure what I was going to get. What I got surprised me in good ways. Super action packed, with the requisite good boy, hiding a secret, love interest and lots and lots of twists.

The plot of Pretty Fierce was pure adrenaline. When you have a girl raised by world class assassins who disappear, bad guys on her tail and a dreamy small town boy you have on heck of a plot. I enjoyed the writing of Kieran Scott. She was able to convey a lot of imagery with her words and she created a very real world, that while completely fictional made complete sense in the scope of the story. The pacing was wicked fast with a few flashbacks to help fill out our knowledge of the characters. There were high emotions in the story and it helped amp up the danger quotient. Now to the characters; I loved some and hated others with nary an in-between.

First the loves, Kaia was a spunky spitfire who just wanted to be normal but has every capability to be a bad ass. Oliver is the boyfriend hiding his own secrets while trying to get close to Kaia; Oliver was a delight. Now the bad, every adult!! Seriously they were all so consumed with their lives and their perceptions (other than the two who seemed great but were snuffed out pretty quickly) that they were flat out obnoxious. I know it’s fictional but seriously when you are a trained killer you don’t do Take Your Daughter to Work Day.

I was almost finished with Pretty Fierce and thought that there was no way the story could end with the (Kindle estimated) 17 minutes left to read. I am both happy and sad I was wrong. It was a showdown to the finish that never slowed or even paused, but I really like the characters and would have been okay with a giant cliffhanger ending for a book two. The only thing that drove me nuts was that the ebook version had some formatting issues that made it difficult to read until I got used to it. This may have been my first Kieran Scott book, but it will not be my last.

Favorite lines – “My mother had once told me you couldn’t trust people who came into your life at the exact moment you needed them.”

An action-packed, edge-of-your-seat novel about a teen who, when backed into a corner, fights back, from the author of What Waits in the Woods

Kaia has been on the run her whole life. The daughter of professional assassins, she knows danger—and she’ll do anything to survive. After her parents vanished during a job gone bad, Kaia’s spent the last year in hiding, trying to blend in as an ordinary teenager, and there’s no one who makes her feel more normal, more special, than her boyfriend, Oliver.

But when she’s attacked by someone from her mother’s past and Oliver catches her fighting back, Kaia’s secret is exposed. In a split-second decision, she flees the small town, taking Oliver with her. Stalked at every turn, Oliver and Kaia must protect each other…or die trying.

This review contributed by 125 Pages. Laura is an addict. She reads 5-8 books a week. In addition to writing her own book reviews, she frequents other book review and blogger sites for just that little bit more.